A Future Predicted but not Prevented 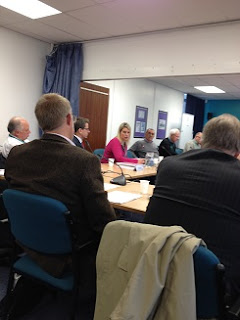 He was not alone.

I and other members of the public like Denise Wyatt were visibly angry as can be seen in the ITV Meridian and Daily Echo reports. Perish the thoughts of the families of loved ones affected by the neglect of Southern Health.

But are such farcical meetings of governors and governance unique to Southern Health as a foundation trust?

No, but the crisis engulfing Southern Health amplifies the flaws in governance that I highlighted in my research five years ago. That research is still relevant today.

Perhaps I am at fault for not publishing it more widely at the time, or being too trusting with the Quality Accounts published by NHS trusts in the South over the past few years.

Now with the benefit of hindsight and from the publicity generated by campaigners like Justice for LB, Richard West and Ian Penfold (it shouldn't have to have been exposed this way) we know Southern Health were stretching the truth - if not flat out lying!

When it came to presenting their Quality Accounts to my (much later) successors on the Southampton Health Overview and Scrutiny Panel in early 2015, the Southern Health documents were not ready - sounds sadly like the lateness of their investigations into unexpected deaths!

And the timeliness, accuracy and relevance of information presented to that Committee are questionable - just as it has been for the Council of Governors.

With such a large organisation as the NHS, it is impossible for one person to check the figures of all the trusts. Isn't that what the many regulators like the CQC and Monitor are for? Are they failing too?

Advice I have received from academics over the past few years was that the problems I highlighted in the FT research were well-known. So why hadn't research like mine been done before?

As well as being predicted, the problems at Southern Health and doubtless other foundation trusts have not been prevented. Why? The answers are in the research, and I will run through those another time.

But when I was going back through my research this week, it was almost like I had predicted the future - this was not difficult as the research showed the problems were already occurring in the present...

... so whenever I've had the opportunity: whether chairing the Southampton Health Overview and Scrutiny Panel, campaigning against privatisation of the NHS, or doing research and presentations on governance, I've pointed out the flaws in the governance of NHS foundation trusts.

Successive governments may have tinkered with the governance structures. But they have not removed the many flaws.

Those flaws in governance don't exist in abstract form.

They are very real. And they've changed lives - not necessarily for the better and in some cases very much for the worse.

Governors are not responsible for day-to-day operation of the health trusts they are supposed to oversee and scrutinise. That is the job of the executive directors and staff. Governors have powers, even if these powers are not all they need to be. Where they don't have powers, they need to "use their noodle" or rather, use influence better.

That is to say, the flaws in governance have to be removed, but in the meantime they must be worked around, if governors are to properly fulfill their roles.

There are many well-intentioned people who are governors. But the good intentions of these volunteers have to be supported by the NHS to be better governors (e.g. proper training and timely information). It shouldn't be left to the public or outsiders to do it for them.

We have done it, as volunteers, for free. But it shouldn't have to be this way.

Whilst there is an encouraging nucleus, it is clear from this week's meetings, from discussions with governors, and analysis of the minutes of previous meetings, that there are not yet enough governors at Southern Health that are performing the role fully.

This week, following us pointing out some of these flaws at the meeting and in our questions to governors, Denise and I wrote some advice that has been forwarded to all Southern Health governors. We've already received a constructive response from one of the governors, and hope to continue the dialogue.

We very much hope that our advice is listened and acted upon by all governors, and leads to better accountability of:
for the dire crisis of care and management of care at Southern Health.

And that our advice will help governors to better fulfill their duties to avoid future crises at Southern Health and elsewhere in the NHS.

But if our advice is ignored or not acted upon, then we reserve our rights to campaign to remove those governors.