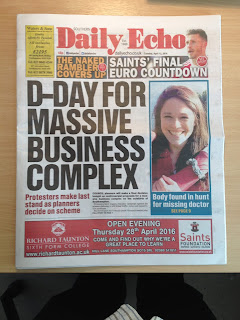 Denise Wyatt's views are communicated on today's Daily Echo front page and page 7 here. Denise and Andrew are on the left of the photo holding the placards "Air Quality not Labour ££££" and "Green Space not Labour ££££". This was at a protest on Gover Road, opposite the proposed site.

A couple of photos of the printed version are attached to this blog post article.

UPDATE: Here is a letter to the Echo from local resident Roy Sanders. 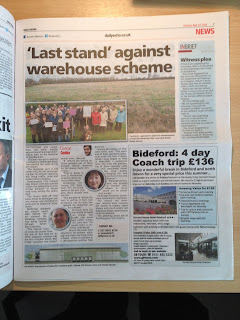 At the last public meeting, Cllr Pope wanted the full details to come back to the Panel so that residents and he as their representative could make their views known. This was agreed. But now members of the Panel and officers of the Council have moved to stifle public involvement.

We have been speaking to residents that will suffer if this application is given the final go-ahead tonight.

And they are not happy.

And we have seen an email from one of the members of the Panel, Councillor Nigel Hecks, who thinks the public should not be allowed to speak!

Test LaneHecks, Nigel (Cllr)Sent:   11 April 2016 13:50To:Denness, Mike (Cllr)Cc:Tucker, Matthew (Cllr); Coombs, Hannah (Cllr); Wilkinson, Graham (Cllr);
Chairman,
I have carefully considered the various emails from residents and Cllr Pope requesting withdrawal/ deferment of this item.  I have no doubt that, I'm the light of the excellent report by officers,  the item should proceed as usual and that there should be no public speaking on the matter. The panel has all necessary information to take the decision and any further delay is neither warranted nor in the public interest.Kind regards,Nigel Hecks (Cllr)

This is the same councillor who wasn't even there at the October meeting! He was replaced by another councillor (new Conservative councillor Alex Houghton). And Councillor Hecks attacks democracy in this way! Do the people in his ward (Sholing) also think their views shouldn't be listened to?

Does he think his views are more important than the public's?

His views are unconventional. They are also wrong. He believes that Solent University is not a "real" university like Southampton University. His snobbery comes across in his attack on the free speech of Redbridge residents.

This Council and councillors like Cllr Hecks do not want to listen to the public.

So not only do Labour but seemingly Conservatives too want more warehouses like the Lidl monstrosity which local residents HATE.

They also want to continue the attack on OUR GREEN SPACES.

Tell them NO! tonight at the Civic Centre at 6pm.

Tell them NO! in your postal vote or at the polling stations, 7am to 10pm Thursday 5th May.

VOTE INDEPENDENT to tell them NO!
Posted by Hampshire Red at 08:40:00