What do you think of Southampton's Labour-run Council ideas to tackle air pollution below?

It comes after they have been "in control" of Southampton City Council for almost five years, since May 2012.

They have approved even more warehouses, especially in the Redbridge area.

It seems to have been all talk and no do.

So the following is taken from the public Council document "Frequently Asked Questions" about the "Clean Air Zone" idea they have had, which they claim will be done to improve air pollution in Southampton.

It is quoted verbatim.

We Independents aren't sure it will happen.

And we aren't sure that even it does happen, that it will have much of an effect.

But don't just take our word for it.

Neither does the University of Southampton, according to their research Matt Loxham, when he appeared on the BBC recently.

Like many cities Southampton experiences poor air quality, much of this is caused by road transport.  DEFRA published the UK Air Quality Plan in December 2015. The document identifies Southampton as one of five cities which will be required to implement penalty charges for the most polluting HGV’s, buses and taxis when the mandatory zone comes in to force in 2019.

We are advised that the anticipated standards expected for the clean air zones will be as follows: 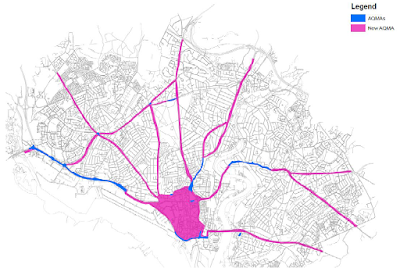 If your HGV, bus, taxi meets the emission standard there will be no charge.
Private Cars are exempt from the charge.
The level of charges for noncompliant vehicles will be determined by the Government at a later stage.
Posted by Hampshire Red at 16:02:00